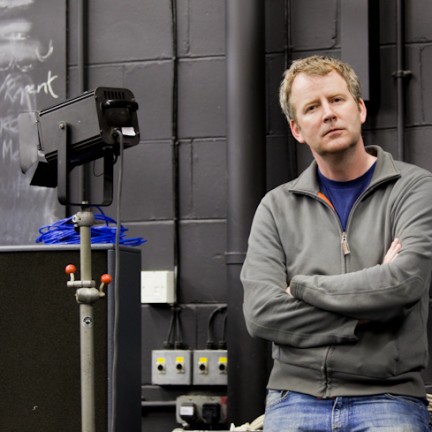 Andrew Quick studied English and Philosophy at Newcastle University and trained as a theatre director at the Sherman Theatre in Cardiff in 1984. Having worked professionally in making and touring experimental performance, he returned to academic study in 1989, completing a PhD investigating the histories and languages of contemporary British experimental performance at Bristol University. He has worked at Lancaster since 1991, where he teaches undergraduate courses in the areas of Experimental Performance as well as teaching on practical units. Quick is also a founder member of imitating the dog, an Arts Council funded performance company that tours nationally and internationally. For further information see imitatingthedog.co.uk

His written academic work is closely bound up with contemporary art practices and much of his writing on performance, photography and installation investigates concepts of space, play, technology, documentation, scenography and performance ethics. He is the author of The Wooster Group Work Book (Routledge, 2007), the first major publication on this leading New York theatre company since David Savran's Breaking the Rules (1986). He was co-editor of Shattered Anatomies (ArnolfiniLive, 1997), Time and Value (Blackwell, 1998) and On Memory (Routledge, 2000).

Quick researches into four main areas: contemporary experimental art practice, with an emphasis on performance, installation and photography; documentation and process in performance; performance ethics; and practice-based research. He has published on Forced Entertainment, Impact Theatre, The Wooster Group, Fiona Templeton, Yoko Ono, Robert Longo, Tony Oursler, Willie Doherty, Victoria Theatre, Ken Feingold, Dennis Oppenheim, desperate optimists, Richard Foreman. Quick's practice-based research has primarily been pursued in collaboration with Leeds based theatre company imitating the dog. He has co-written and directed with long time collaborators Pete Brooks and Simon Wainwright a number of works that include Arrivals and Departures (2017, Hull City of Culture), The Train (2015/16), A Farewell to Arms (2014), Sea Breeze (2014, with Raisin and Willow), The Zero Hour (2012), 6 Degrees Below the Horizon (2011), Tales From the Bar of Lost Souls (2010), and Hotel Methuselah (2006/7). This research interrogates contemporary notions of narrative and screen technologies and the relationships between live and recorded presences.

Nocturnes: A work in progress with imitating the dog

Following A Farewell to Arms (2014) and The Train (2016), Quick’s work with imitating the dog returns to the mid twentieth century and on this occasion the world of Cold War espionage. It is an imagined landscape we know well from the novels of John le Carré and Len Deighton, particularly Michael Caine’s iconic working class …

“This place is built on working hands Washed here by the sea…” Andrew Quick has been working on a major project for Hull City of Culture with his company Imitating the dog. The piece examines the history of migration from a contemporary perspective, exploring the journeys which have gathered a population and moulded …

An adaptation of Ernest Hemingway’s A Farewell to Arms

Acclaimed theatre makers, imitating the dog (Andrew Quick, Pete Brooks and Simon Wainwright), bring their unique theatrical vision to a new stage version of Hemingway’s seminal First World War novel. Touring in the 100-year anniversary of the start of World War One, they are seizing the opportunity to tell one of …